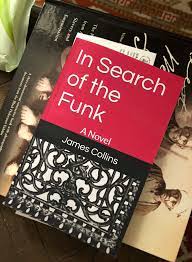 What if George Orwell had read Franz Fanon? or Malcolm X? One might get a book akin to James Collins’s first novel, In Search of the Funk. Collins offers the reader a compelling story of personal transformation amidst social conflict. Collins paints a vivid dystopian reality, not too different from our own, where the neo-liberal order is collapsing, and the government is sliding towards authoritarianism.

Collins successfully blends his dystopian narrative, eschatological themes, and the power of music in a story of hope.

Utopian/dystopian fiction is primarily a commentary on the present, but where the “present” is changed to place the critique in greater relief.  Into the Funk, presents a world so close to our own it makes one wonder about our own “dystopian” reality.  The story starts in a highly segregated community where the presence of whites is unusual.

There is a significant gap in access to technology—a digital divide—which shapes and restricts information access. The US has become so entangled in overseas conflicts, particularly against Muslim nations, that its role in the world has become undermined. Domestically, the US is sliding towards authoritarianism, where police terror is the norm and a frightened and disorganized populace is looking for a savior.

The story is particularly timely considering the current political issues surrounding structural racism, police brutality, and economic dislocation. Collins’s protagonist is Peter. He is homeless and down on his luck. Is he running from his past? Or into a new future? Starting with nothing, he must depend on his street smarts to survive.  Eventually he finds the New Nation of Islam (NNI).

The NNI serves as a community hub and political voice of the African American community. Peter finds employment with the NNI and his journey begins.  It is through his experiences with the NNI that he comes to see the world differently, finds meaning, and makes both social and political connections that previously seemed impossible.

Collins’s work clearly draws inspiration from George Orwell’s dystopian classic 1984. Collins’s Peter Funke and Orwell’s Winston Smith are both reporters. Both are caught up in conflicts of grandiose proportions. Both are sympathetic characters.

There are critical divergences as well. Whereas Winston is a reporter for “the party,” molding yesterday’s headlines to meet today’s political imperatives, Peter’s job is to expose the hypocrisy of the government and to incite the readership to action. Orwell presents the “the proles” (the average working people) has being hopelessly apathetic and impotent, whereas Peter’s job is to agitate and organize the masses.  In this respect, Collins’s work is more hopeful than Orwell.

Unlike Orwell, Collins makes race a core feature of his dystopian society and the counterhegemonic resistance. The political centerpiece of the story is the New Nation of Islam.  The fictional NNI draws direct inspiration from the historical Nation of Islam.

Peter, for example, is given a tremendous amount of responsibility in the organization but without any pressure to convert to Islam.  The NNI rhetoric blends apocalyptic imagery of a final battle against “the Devil'' with practical and well-reasoned tactical decisions about the relative balance of social forces. The NNI is perhaps an imagined version of NOI had Malcolm X not been assassinated.

The religious imagery of the book is not restricted to the NNI but also contains allusions to Christian messianic beliefs. Peter Funk not only shares his name with Parliament Funkadelic, but Christ’s “rock.” Just as St. Peter was an apostle of Christ, so is Peter the primary messenger of the New Muslims. Peter accepts his calling as a reporter for the Final Call and is deemed worthy of carrying the message of the enigmatic Minister Y?

Peter’s apprehensions about his role and the New Muslims parallel Peter’s portrayal in the Gospels. Peter is, at times, unsure of his teacher’s goals, but continues to serve in spite of his trepidation. Peter’s special role, as a recruiter, a “fisher of men,” solidifies his commitment and faith to the cause.

In Search of the Funk portrays a dystopian future, it is a future that retains connection to the past and Collins uses music as a vehicle for creating these connections. Peter Funke is a former musician who finds solace in his diverse musical taste. Just as history is replete with examples where music becomes the “soundtrack” of social movements, Collins weaves musical references throughout the story.

Marvin Gaye’s 1964 song “Dancing in the Streets” (first performed by Martha and the Vandellas) became a Civil Rights anthem during the long hot summers of the Civil Rights movement. “Dancing in the Streets” came to mean protesting in the 1960s, just as it does in Peter’s world. Duke Ellington and Billy Strayhorn’s This Strange Feeling is a discordant and disorienting song, apropos to the story, and Peter reminds us of this singing to himself “I walk, I try to do so without reeling. I talk and someone answers from the ceiling.”

Collins’s book will be particularly satisfying for political activists or those versed in the history of social struggle but is accessible to anyone who simply appreciates a good story.  In the end, the Funk is a tale of hope. It poses the possibility that people can transform their world, even if just a small corner of it, through a fierce commitment to justice. —Richard Goff

James Collins is a retired family therapist and Pittsburgh native who currently resides in Philadelphia. In Search of the Funk is self-published through Amazon.