on January 05, 2021
1. As I write this, it is Tuesday, April 28, 2020, and it is night.
A gullywasher of a storm has blown through my St. Louis city neighborhood. I am fairly certain all the young radish plants in the pots outside my backdoor have drowned from the waterfall assault out of overwhelmed gutters. Their leaves hang limp over the lips of their containers, wilted as overdressed lettuce.
I sweep the kitchen floor because I’m tired of not sweeping it.
I fix a favorite snack that conjures memories of childhood, cheese on tortilla chips melted under the broiler, not because I am hungry.
I make herbal tea so caffeine won’t infiltrate my dreams, which are already more than adequately stocked with subplots, skies filled with strange portents, and impossible tasks necessary to complete.
Maybe I will stop thinking about the wall.
Work kept me some semblance of together, while it lasted. The interplay of set and arbitrary deadlines. I send an email newsletter out on Tuesdays, and, indeed, so it happened. I had promised to complete two other tasks, and complete them I did. I remember when they would have taken minutes, not hours.
I finished a jigsaw puzzle full of vibrant colors, a jungle scene populated by butterflies, frogs and chameleons. I will drop it off soon to my mom’s house; she needs the distraction. She was born in the Great Depression This is not the world she wanted to see.
Art provides catharsis. A friend hosted a reading of Othello over Zoom this past Saturday. All participants switched characters every scene; we each took a turn at Othello, Iago, Desdemona. I left early, while Desdemona was still alive. I followed that feast of words with a dessert of music, joining an online gathering of fans watching the band U2’s “Live in Boston” concert video from their Elevation tour, each in our own homes. We knit together community through hashtags.
That show had been recorded in June of 2001, not long before another moment this country was plunged into grief and confusion. But even absent cataclysmic events, space is left for big themes in a U2 concert. The band being who they are, ever ready to let their music speak the unspoken, confronted US gun culture through the song “Bullet the Blue Sky.” Bono took on the voice of the man who had shot and killed John Lennon in 1980. He spoke as though addressing the present-day moment of the concert of all the gun deaths that would happen in a two-decade span, resulting in “more body bags than Vietnam.”
Those words have been tolling like a bell today.
58,320 names are inscribed on Maya Lin’s black granite wall. It is 10:10 pm on April 28, 2020. 58,955 Americans have died of COVID-19. [As we post this article online from the the May 2020 printed Zine, that number is now a staggering 354,000 ; when you read this, the number is surely greater.]

Death and destruction have an uncanny gravity, a force of attraction impossible to understand but which nevertheless acts on us. 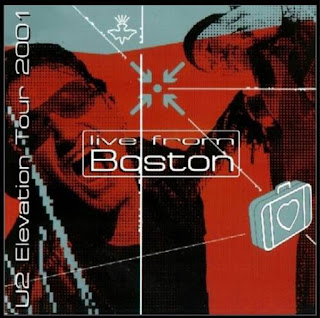 2. I was in Boston for the first of the four shows U2 performed that week in 2001. The memory of it is seared in my mind—augmented by what I can see now, thanks to the camera crew. The portion of the show ushered in by “Bullet the Blue Sky”—an encore that began with a disturbing film montage about gun violence, then followed by “With or Without You” and “The Fly.” This section had a dark, terrifying, thrilling energy, as Bono invoked the phrase “more body bags than Vietnam” to warn us about the coming death toll from unchecked gun violence.
Bono’s invoking of Mark Chapman’s name made me gasp, like I’d been plunged underwater, accompanied as it was with a photo of John Lennon’s blood-spattered glasses filling the screen behind the stage, and the relentless pulse of “With or Without You” rumbling through the arena afterward. What were they doing? Why confront mortality and tragedy, fame and obsession, with such unblinking intensity?
As “With or Without You” ended, Edge sent out cascades of chimes, bright and distant as the music of the spheres. Bono sang-spoke a dreamlike, childlike soliloquy that cast all of us as performers at the moment before taking the stage. He described this with hushed reverence, as if it were the Transfiguration. Except—he lifted his hand and let it drift downward, a leaf in the autumn wind, as he sang, “We shine like a burning star, falling from the sky…”
The meteor crash of Edge’s guitar drove home the point: this was no Transfiguration, but Satan plunging down like lightning.
Nothing I have seen onstage before or since matches that suite of songs. The themes they raised for examination, the jolt of electricity they unleashed, and their fearlessness as they embarked on this journey—all this pulled words from me then and pulls words from me now. I need to examine what happened then to better make it through what I’m experiencing now.
Death and destruction have an uncanny gravity, a force of attraction impossible to understand but which nevertheless acts on us continually. “If it bleeds, it leads,” the old news adage says. We’re wired to be drawn to tragedy and horror.
And so I watched the number of COVID-19 fatalities increase day after day, clicking on one World Health Organization situation report after another, like I was witnessing a slow-motion car crash. Artists have known for ages that we are compelled to hover our attention at such places. Shakespeare himself must have known it when he created a character like Desdemona and, by creating her, condemned her to a wretched death.
“Weddings, funerals,” I heard Bono say once at a show, as though offering examples of gigs his band could be hired for. He quickly clarified, “We prefer weddings,” but they excel at lamentation. They have a keening charism. The very reason I’ve been “attending” online U2 concerts for many Saturdays in a row is that I find they are a balm in troubled times. They comfort those who mourn.
But words like “balm” and “comfort” catch in my throat when I think of the Mark Chapman/Fall of Satan suite. Bono’s phrase “More body bags than Vietnam” can now be applied to the United States death toll from the Coronavirus.
Maybe horror rings deep because it rings true. Human history is scarred with plague; we just tend to forget this in the age of science and medicine.
Dramatized horror, like speaking in a killer’s voice, or singing truisms offered on a phone call from hell, or—to take it to the liturgical context—shouting “Crucify him!” in a passion play, does not comfort or soothe. But it says something necessary.
That’s not all that is spoken, either at a U2 concert or in a quarantined life. Other songs at that show in Boston were sung not from dark depths but in the flash of bright white light.
And as I write this, it is Thursday, April 30, 2020. Today, as before, I worked, made snacks, and drank herbal tea. I did some more reading about the Vietnam Wall; I struggled to put words on the page that would speak a rousing word to this present moment. I checked on my radish plants. They survived the storm. -Angela Pancella