The Ghosts Got Out: On Relapse, Redemption, and Jason Isbell's Reunions 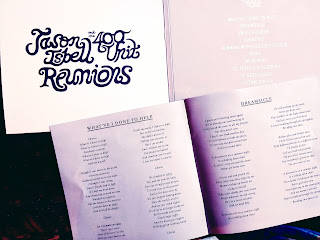 The new Jason Isbell album arrived by postal mail, because the independent record store has been keeping best practices since the pandemic began. But it came from the indie store anyways, because Jason and team partnered with grassroots stores to release the record a week early, which was a few days ago.

The day before my package arrived, I was able to stream the disc for the first time, thanks to a Nashville radio station and their local artists show. But I have lived in middle Tennessee for 25 years, and I am more than okay that we are claiming Alabama-native Jason Isbell & the 400 Unit as our local band. Lightning 100 obviously thinks along those same lines. That Monday night listen, on the good speakers in the den with my spouse, was also celebrated synchronously and spontaneously by hardcore fans in a Facebook fan group, and the outpourings of surprise and delight were as palpable as the undercurrents of sentiment and dread.

Earlier that day, we all had read the New York Times article, thick with the smell of Listerine, the temptation to relapse, the trepidation of marital strain. Reading that open-book interview only scratched a raw place of anxiety for Jason, Amanda, and Mercy, to be honest. But I knew that they were preparing our spirits for a serious journey of approximately 40 minutes in a combination of therapy and church, filled with buckets of hot tears and broken holy truths.

This album could as easily have been called Ghosts or Saints as Reunions, as it reckons with multiple pains and reconciles multiple pasts. But also, it is testimony to the gravity of grief and the inevitability of loss. While the sweet production, swirling guitars, and chiming reverb may tickle like a butterfly kiss, don’t let the mood or melody fool you, because this album is also a swift kick to the internal organs of an already frayed and dismayed reality.

Granted, not everyone craves their old-school rock anthems with a tinge of protest and lament, not everyone needs every ballad to have the potential to provoke an uncontrollable ugly cry. Jason has plenty in his back catalog to train and prepare us for the wailing and snot, but if the new album had not busted up the sweet numb veneer of this week’s quarantine, smashed it into a puddle of petition and prayer, I would not be scribbling these reflections, after only a few listens to my favorite album of 2020. That kind of crying catharsis is central to my self-care, but if you are not ready to feel-all-your-feels, I would approach the emotional roller coaster of Reunions with caution.

Straight shot, I needed “Overseas” to remind me that “revolution” isn’t around the corner (sorry Bernie) but something much messier, maybe worse, yet our unchanging love will see us through. Give truth to us hard on “Only Children,” because not all nostalgia has a nasty aftertaste. Some memories are meant to stick around, and some true sayings sound better with guitar. “Heaven’s wasted on the dead/That’s what your mama said” may be as needlepoint or Instagram-ready as a saying like “Youth is wasted on the young,” but this I can say with confidence: Jason Isbell never wastes a song.

The two rockers that first rocked as singles, released through the winter and early spring, they still rock. “Be Afraid” and “What’ve I Done To Help” only get better, the more they get under your skin. But they even sound more poignnant inside their neighborhood of the whole project. Yet for rocking me to my ever flailing dance-floor core, the back of side B has my back.

Side B has my back because “It Gets Easier” is an AA meeting in four minutes and with guitars.  This song has my back because it is never easy, but it is easier with a Nashville rock and folk icon holding my alcoholic heart in his steady lyrical hands. We need the reminder: handcuffs and cops, watching friends try the wine and the weed, waking up from a drinking dream sometimes twice each week.  Of course, Jason’s daughter Mercy never knew him during active addiction, but this song has a line to warn himself what it would feel like: “My daughter’s eyes when she’s ashamed.”

The closing track is also about his daughter, some indefinite day down the road, but it might be the closest thing I have ever heard him do that is right ready for mainstream country radio. I have already asked Cookeville’s Jake Hoot (former student of mine and recent winner of The Voice) to consider covering it.

My most intense listening and core loving for this record come at its actual center and emotional heart. The keyboard intro and Amanda’s fiddle immediately take the “River” to new territory. It’s as close as I have seen Jason get to a clear-cut sacred song, like from a worn and loved hymnal in the rock n roll church. This song has perfect anthem lyrics full of mantra and of hope. The tune draws you in, then won’t let you go. You are riding the rapids of sin and surrender with a poet-songwriter even priest. But don’t let the song’s lofty baptismal mood confuse you from seeing the lyrical contrast, the blood and mud stains on your soaking white robe. At some level, Jason is still a punk rock Alabama blues man with a honky-tonk mind. The river may offer salvation and the sweet oblivion of true surrender, but there are sweaty scary sins and lingering scars and even corpses that also float around.

So so early in my emotional journey with a new Isbell disc, this album obviously has its shadows and apparitions and oracles I have yet to see, but I plan to visit this holy haunted house often enough to find out what they will reveal. -Andrew William Smith @teacheronradio

This is Ordinary Riff #2, a weekly online column, commenting on music, movies, and other media. In addition to reposts from the print edition of Ordinary Space, this is a new feature for OrdinarySpace-dot-org.