Now Is The Perfect Time to Watch “Unorthodox” on Netflix 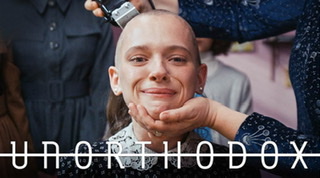 Now is the perfect time to watch Unorthodox on Netflix. Any other time, the life of Esther Shapiro might seem so distant from ours, so alien, that the leap of empathy would be impossible. At this moment, we all feel proscribed. We, like Esther, are stuck in a narrow world where the rules are not of our making and the circumstances of our birth and community seem to dictate what we can do, what we can’t do, and how safe we are. Esther is a young Hasidic woman in Williamsburg, Brooklyn who feels restricted, constricted, dictated to and controlled by a world that makes less and less sense to her until she needs an escape. It is a world that starts with theology and veers oddly into control.

The Brooklyn scenes in Unorthodox take place in a neighborhood that is one of the worst zip codes in New York to live in right now, one in which COVID – 19 is spreading faster and more lethally than almost anywhere else in the City. The Hasidic sections of Brooklyn are two out of the five worst hit zip codes in this pandemic. And through the lens of Esther Shapiro we can understand why.

All of the rules, habits, mindsets, and beliefs Esther wants to run from make her and her community vulnerable. The insularity is painful, the lack of belief in science or fact from the outside world is deadly, the rigid adherence to interpretations of the Torah that oppress women make Esther feel degraded, separate, wrong. They are poignant, too, as people in that community die in record numbers and the life they lived fades a little. Those ultra-Orthodox communities were havens of re-building after the Holocaust and the pogroms in Eastern Europe. They were places where people living together with lots of kids and generations of family crammed into tight spaces meant recovery from the six million lost. Now, they are threatened again.

The four-part miniseries is more than an homage to or a critique of Hasidic culture. It is a captivating view into what it takes to break out of a cloistered and restrictive world in order to be who we were meant to be. It is a “finding yourself by leaving your home” story that is layered and textured by Judaism, Brooklyn, Berlin, and Yiddish language and culture. The cast is almost entirely Jewish, which adds nuance and depth to the show. Much of it takes place in Yiddish with English subtitles and though it is a difficult Hungarian dialect of Yiddish, I could pick out words and phrases and get texture from them. I did not realize until I was deep into the first episode how unusual that is. Usually there are gentiles playing Jews in movies (Barbara Streisand excepted) and that sleight of hand – pretending that Jews look like the average white conventionally attractive actor - makes looking ethnic even more problematic. Seeing myself phenotypically across literally hundreds of characters felt wild and free and I was giddy. To know more about that part of the series you need to watch the “Making of” extra at the end. And I suggest it.

The sense of claustrophobia and release in this small gorgeous story is enough to give us all a taste of freedom as we sit in our houses longing for experiences with difference, otherness, people we don’t see every day. The costs of freedom are real in Unorthodox, and it is a tense exploration of how much of that cost we can bear. Still, when it was over, I bought the book from which it was adapted (same name, the author is Deborah Feldman) so that I could go back and do it all over again. - Michelle Auerbach

This is Ordinary Riff #5, a weekly (or twice weekly) online column commenting on music, movies, and other media. In addition to reposts from the print edition of Ordinary Space, this is a new feature for OrdinarySpace-dot-org.