Scarecrows on the Steeples 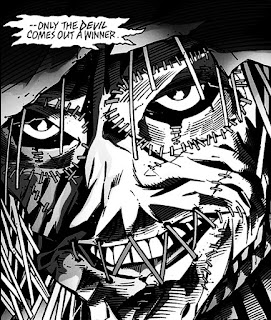 “It’s hard to be a Christian in America” is a comment that is frequently met with contempt and dismissiveness. I used to count myself among those who thought it was impossible for a Christian to suffer in America, but after enduring years of suffering myself and watching other Christians suffer as well, I have to say it is not only possible for Christians to suffer in America, but that many are suffering right now. Bear with me, I hope to elaborate on the ways I find it hard to be a Christian in America.

Growing up, I had one hobby I actively shared with my father: comic books. I couldn’t get into football and he couldn’t adapt to the new video game market. Comics were something both of us could get behind. Our favorite hero is Batman, dark protector of dystopian Gotham. My father and I would go regularly to the public library, check out graphic novels, read these together, and discuss them. It started as simple comics at first, the little ones based of The Batman Animated Series, moving to more sophisticated tales like Frank Miller’s The Dark Knight Returns and Alan Moore’s The Killing Joke as I got older.

One graphic novel I remember my father getting for us was Batman: No Man’s Land. This was a collection of Batman stories set after a devastating earthquake had destroyed Gotham and the city had been quarantined from the rest of America. My favorite tale in this series involved the Scarecrow. Scarecrow was psychiatrist Jonathan Crane who was obsessed with fear, so much so that he started performing illegal and unethical experiments on people using a fear inducing gas.  Scarecrow was held up in a library with a bunch of other survivors.  He watched as they burned the books for warmth, yet leaving one untouched, the Bible.

So, to Scarecrow this situation was a gold mine, all he needed was an in, a way to exploit the already present fear, and now he had it. Using the Bible to justify his actions he turned the people from peaceful men and women just trying to get by in the midst of this disaster into violent fanatics. When weapons were discovered, Scarecrow convinced the people that they were a gift from God to be used to aid them. Scarecrow had them convinced they were the chosen and he was their prophet. Eventually his cult became such a problem that Batman had to come and take Scarecrow out, freeing the people from his control. This story showed me that even the most well- meaning of people can be turned bad by a charismatic leader with the ability to play on strong emotions. Little did I know that by my young adulthood, the country would be living this story everyday.

We now live in a world overrun with Scarecrows to the point where they seem to be the face of much of cultural Christianity. And these Scarecrows leave their marks on every church across the world. The place their own scarecrows upon the steeples, which scare away converts and questioning youth like crows from crops. Everywhere you turn there is a Scarecrow, and next to Scarecrow, there is a Bible. Now this is in no way a new phenomenon, throughout history for every religion or philosophy, there have always been those who subvert it for personal gain. But there is a difference between the times we live in now and any old period of normal fundamentalism. We’ve let the Scarecrows run our religion, and they have run it into the ground.  The Scarecrows have taken the Christian notions of love and acceptance, and they have subverted them into hate and rejection. All of this by using Scarecrow’s favorite human emotion, fear. “Fear the Muslims, they killed Americans. Fear the Government, it wants rule your life.  Fear the gays, they want to destroy marriage. Fear the poor, they want to take your money.” All across America this mantra of the Scarecrows can be heard. And its damaging effects are felt by all.

We, as Christians, must rise up in defiance to the Scarecrows. We must tell them that we are sick of their ideology of fear and hatred and we will allow them to impose it on us no more. No more shall they be able to use our savior’s name to promote their unjust teachings. No more shall they be granted the power of our religion. If we do not then the Scarecrows will destroy Christianity.  Scarecrows seem to have little use for Jesus’ sermon on the mount or his teachings.  Jesus taught us to love our neighbor. Scarecrow preaches that we buy a gun and point it at their house. Jesus taught us to care for those in need. Scarecrow insists that the needy are only out to get you and must toil in their own squalor. Jesus taught us to accept all with open arms, Scarecrow says if they aren’t like us then they must be evil.

I think back to a cheesy saying from my childhood. WWJD? Perhaps turn over the tables peddling fear many Scarecrows construct? Are we bold enough to say, “Not in this house!”?  God is a god of love and acceptance and probably is more concerned with the genuineness and covenantal nature of love between humans more than maintaining gender binaries.


There will, of course, be a retaliation to this.  To the politician who stands up to them, Scarecrows will use the power we’ve given them to put them out of office at the next election.  To those of us who welcome our Muslim brothers at the same table, the Scarecrows shall ostracize us and call us traitors and blasphemers. But by doing so we send a strong message to the Scarecrows, “I do not fear.” And it is with this new mantra, the one used by our savior upon the cross that will drain the Scarecrows’ source of power. And by doing this we can finally remove the scarecrows from our steeples.
- - -
this essay appeared in OS #1, released in print for Pentecost 2018.

Call for Submissions to Pentecost Issue of Ordinary Space

Calling all artists, authors, creatives, and collaborators! Your ordinary editors ask for your input into the next edition of Ordinary Space #3, due at Pentecost 2019. This will be third installment of our print zine of “creative expression as the intersection of theology, popular culture, and social change.” We are particularly interested in pieces that explore how the fire of the season informs your thoughts on death, rebirth, and resurrection, but that is only a starting place. Essays, art, photos, and poetry of any kind will be considered. Please submit by Friday May 17 to ordinaryspacezine@gmail.com 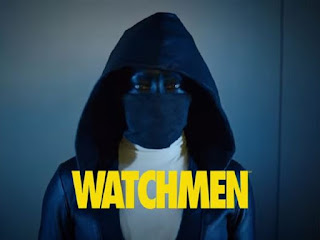 Are You Watching the Watchmen?

Over the last two weeks I have been deep into the first season of Watchmen on HBO. I was given the advice to watch the show and then go back and watch the movie that is the backstory and I followed that advice. Please know this universe created by Alan Moore as a comic book that became a movie has been carried forward by Damon Lindelof so feel free to start here. Watchmen is science fiction showing us our world - reflecting back possibility and problems, issues and influences, and it is scary as you can imagine. And then some. Here is what I can tell you about Watchmen without spoilers: Now is the time to watch this first season. If you heard about the Tulsa Race riots in the media you will get to learn about them in a vivid and indelible way. I am still figuring out what happened in the show and realizing that I need to watch it again. You won’t get it as it is happening and that is totally okay. Memory is a tricky thing, as is intergenerational trauma. You have seen brillia